Halloween or “All Hallow’s Eve” is a holiday celebrated in a number of countries.You can read more about the origins and history here. In the US, Halloween is celebrated as a secular holiday. There are religious people who DON’T celebrate Halloween because they feel it violates their religious beliefs,  but most Americans don’t associate Halloween with any religious tradition.

It is not a school holiday. People do not take the day off or go on vacation for Halloween!

When we think about Halloween, we think about scary stuff – ghosts, skeletons, monsters, zombies, etc. It’s a time when people see horror movies and tell ghost stories. Some people decorate their houses. You won’t see a lot of that in Manhattan, but if you go out to the boroughs or nearby towns you may see houses with elaborate Halloween displays.

Probably the biggest visual symbol of Halloween is the jack o lantern. To make a jack o lantern you cut off the top of a pumpkin. Then you scoop out the insides. Finally after scooping and rinsing out the inside, you carve a face, using a very sharp knife. Then you place a candle inside the pumpkin and light it. (You can see a video here.) In the suburbs and neighborhoods where people have houses, you will see jack o lanterns on porches or front stoops. In the city, you might see some in people’s windows although today people often have plastic jack o lanterns with no candles.

Children dress in costumes on Halloween. Costumes aren’t limited to scary costumes. Children may dress up as monsters, but many kids choose other kinds of costumes. They dress as superheros, pirates, princesses, or characters from their favorite movies or stories. Children go out in the evening and knock on the doors of their neighbors. The children shout, “Trick or treat.”

What does “trick or treat” mean? The children are expecting to get candy – a treat, but if they don’t get candy, they may “play a trick” for example throwing eggs at the door. Nowadays, children don’t play tricks! They are usually well-supervised by older siblings or their parents when they go door to door, and they don’t go to the houses of strangers.

People signal that they are home and will give children treats by displaying the jack o lantern or other Halloween decorations. In New York City where most people live in apartment buildings, many buildings  have rules about Halloween. They may have “official” hours when it’s okay for kids to go “trick or treat.” The building management may tell people to display an “official” sign on their door if they are willing to open their door to trick or treaters. 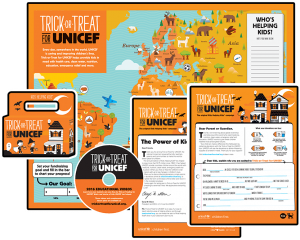 Some children may also carry a little box with a slot for coins and bills. They will say, “Trick or treat for UNICEF.” They are collecting money to help children in developing and impoverished countries. They will return their box with the money to their school where it will be collected and sent to UNICEF. It’s a good idea to keep some change as well as candy, so you can give change to kids collecting for UNICEF. You should give them candy also!

You may find other events associated with Halloween besides “trick or treat.” Shopping malls may have special celebrations or parties to attract families. Communities or even buildings may have parties or parades for the children. Of course, New York City has its own parade. The parade happens in Greenwich Village and has been a tradition for more than 40 years. You can read more about it here.

Halloween is not just for kids and teenagers. Adults participate in the big NYC parade, and in other ways. Your workplace may have a costume party. Sometimes salespeople in stores will wear costumes. Teenagers and adults often go to Halloween costume parties. These parties usually happen on the Friday or Saturday night BEFORE Halloween because people have to work on Halloween and on the day after.

Halloween is a wonderful celebration, but some caution is advised. Parents should supervise children when they go out to trick or treat. While children rarely play “tricks” these days, some people may use Halloween as an excuse for bad behavior. There may be a lot of drinking and rowdiness. In some neighborhoods, teenagers may have egg fights or throw eggs at cars. So have fun, but be careful out there!