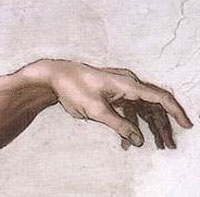 Let’s start with the use of  hand as a verb. Hand is a regular verb. (It takes “ed” in the past and perfect tenses.) In its simplest form it means to pass or give something to someone.

Example: “Could you hand me the salt, please?”

In the above example “hand” is a synonym for “pass.” “Hand” and “pass” are absolutely interchangeable here.

Hand can  be used as a verb whenever somebody gives you something directly BY hand.

My husband was on the phone with his mother. She wanted to say hello to me. He handed me the phone. (Pass would also be okay here, as would give.)

Could you hand me a pen?

Be aware that hand as a verb is used in specific phrases and the meaning changes with specific prepositions. If you are a student, studying almost any subject formally in a class, you are likely to hear the following phrases:

Handout, as one word, is a noun used to describe printed material that is handed out:

The teacher gave us handouts that explained the assignment.

You could say: The teacher handed out handouts that explained the assignment. However, that sounds terrible! I will probably write a post someday about how much Americans hate redundancies and try to avoid them!

Handout also has another meaning. It can mean to give money (or goods) directly to someone in need, such as a homeless person. 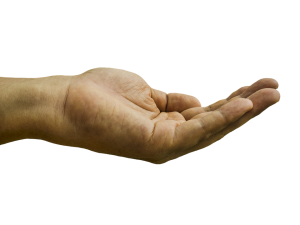 Examples: There’s a homeless woman who always walks into our diner trying to get handouts. (She begs patrons for money or food.)

Hand up is not used as commonly as handout, but you may see it sometimes. It’s almost always used in contrast to handout, and this may tell us something about American culture and attitudes about giving. To give a handout implies that you neither asked for or received anything in return. If you give someone a  hand up, the implication is that you help them by offering them something like a training program or a job that may help them to be more self-sufficient in the future. A micro-loan to start a business for instance is a hand up. Variations on the phrase “A hand up, not a handout” can be seen in pamphlets and websites for many charitable organizations. Try googling the phrase, and you’ll see what I mean!

However, if someone tells you to “Stick your hands up!” or to “Put up your hands!” that person is NOT offering you a hand up! You’ll hear those phrases a lot in crime shows and movies. 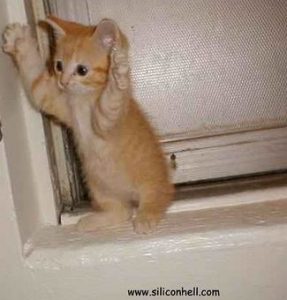 James was in his office late. He didn’t realize but he triggered a silent burglar alarm. Suddenly the police arrived.
“Put your hands up where I can see them,” said an officer.
“Yes sir,” replied James. 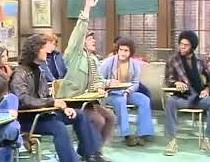 There’s yet another distinct use of  hands up.  Classroom teachers generally ask students to “raise their hands” when they wish to ask a question. Note the exchange below.

Student: The answer is 65.
Teacher: That’s correct, but I didn’t call on you.
Student: But I had my hand up!
Teacher: Yes, I saw that, but you still need to wait until I call on you.

Another commonly used phrase is to lend a hand, which just means to help someone out.

When Phoebe’s mom was in the hospital after her accident, all of the neighbors tried to lend a hand, by helping Phoebe to take care of her younger siblings and making sure she didn’t miss any days of school.

We also use the phrase to give someone a hand. Often the phrase is a plea: “Give me a hand!” or “I could use a hand here!”  This has a similar meaning to lend a hand, but is usually used more informally, at home, work, or school.

Joan was making dinner for her friends. She was busy in the kitchen while her husband Bob was entertaining the guests. Joan realized she needed a little help.

“Bob, could you give me a hand?”
“Sure honey. What do you need?”
“I just need some help in the kitchen.”

You can also give someone a hand by applauding them. You will often hear television hosts, asking the audience to give a performer a hand.

Hands off: This can have two distinct meanings: A boss who is “hands off” doesn’t get overly involved in the day to day operations of a company. Example:

Ted is a hands off kind of supervisor. He assumes his employs know what they’re doing, and he lets them work without much supervision or feedback from him. He doesn’t micro-manage.

Hands off can also be a command NOT to touch something or someone.

“Keep your hands off of my things!” (Don’t touch anything that belongs to me!)

Something can also be handed off (passed) from one employee to another:

Tom works the afternoon shift. When his shift ends, he has to hand off any remaining work to the night guy.

Sheila and her ex have joint custody of the kids. Every other Wednesday she hands them off to him.

Hands on has the opposite meaning of the first example of “hands off.” Example: Shirley doesn’t just own the company. She’s involved in every aspect of products. She’s very hands on.

A hands on person is involved in every detail of the job.

In card games such as poker, the cards given to you are called your hand. To “play the hand you are dealt” metaphorically means to make the best of your situation or turn a “losing hand” into an advantage.

Example: Margaret Hamilton was never beautiful, but she always wanted to be an actress. In a time when movie stars were ultra-glamorous, Hamilton was known for playing “ugly” roles. She played the hand she was dealt and always found work. Today she’s still remembered as The Wicked Witch in The Wizard of Oz.

I hope this lesson comes in handy! Feel free to ask a question in the comments section.