For this post, I’ve collected many of the common phrases you’ll here with back.  You’re likely to hear them on the street, in the office, on television, and just about everywhere else.

Both “backing up the car” or “backing into a space” involve the definition of “back” that means “to go backward.” In many cases, we use the word back to mean to go back to something. For instance:

“Get back.” This phrase may be an order shouted toward a crowd by the police, warning them not to move forward. While technically it is considered an adverb here, it is really being used almost like a preposition.

We can also use “get back” to mean “return to doing something:”

“I’m sorry to bother you. I’ll let you get back to what you were doing.” This is something your neighbor might say if she knocked on your door to ask you something and realized you were in the middle of fighting with your spouse. In this example “get back” could be replaced with “return.”

Ann: I loved studying French. I was getting really good at it.

Ann: I just don’t have the time to commit to classes.

I will be back soon. = I will return soon.

Bob: Did they ever get back to you about the resume you sent?

Ann: They sent me an automatic email that it was received, and that someone would get back to me if my qualifications matched any of the open positions, but I never heard anything after that.

Do you think Bob will get that job?

Sometimes people use the phrase “I’ll get back to you,” when they don’t have an answer and don’t want to directly state that they don’t have the information, they haven’t made a decision yet, or they don’t wish to give an answer.  For instance, in 2008 a reporter named Katie Couric, asked then-vice presidential candidate Sarah Palin if she could name a Supreme Court decision she disagreed with. Palin had no answer, and stammered, “I’ll get back to you on that!” Later, she accused Katie Couric of asking her difficult questions designed to make her look stupid. She called these “Gotcha questions” and another meme was born! 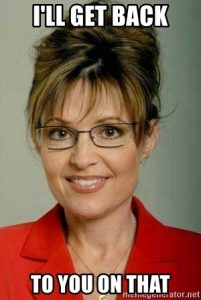 “Come back, soon.” This expression means, “Visit us again soon!” Below is an image from a famous, and much parodied, American television show from the 1960s. Each episode ended with the theme song, and the family inviting us to “come back.” Can you name the show? 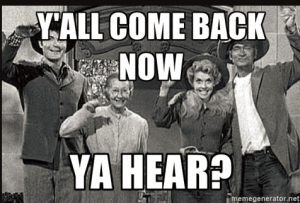 “Welcome back!” This is a common way of greeting someone who has been away for an extended period of time. Example: Emily left the company for almost three months to get cancer treatments. When she returned to work, her friends gave her a “Welcome Back” party.

Bob: Welcome back. How was your vacation?

Ray: It was so good I didn’t want to come back!

Gossip: Her ex-husband left her a year ago, but she still thinks one day he’ll come back.

“A comeback” is something you might read about in gossip columns or celebrity news. Sometimes we use the word “comeback” to describe when someone who was successful at one time, but then became less successful, is suddenly successful again. We also might use it when talking about something that was once fashionable, is suddenly becoming popular again.

By 1994, John Travolta was no longer a big star, but Pulp Fiction was the perfect comeback vehicle to revitalize his career. 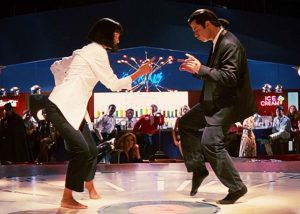 Hey remember a couple of years ago when everyone was wearing Uggs boots. I hear they’re making a comeback! 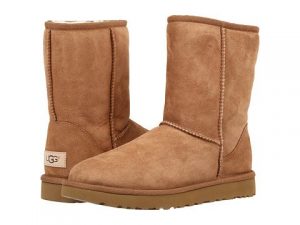 If you work in sales, you might hear this from a customer:

Sometimes the things we want back are less tangible than money:

Ann: Why did Jeff divorce his wife, get a face lift and run off with a woman half his age?

Bill: Maybe he’s trying to get his youth back.

Other verbs we often use with “back”  are: put, give, take, and bring.

Ann: I’m so glad you’ll be taking care of our dog while we’re away.

Tracy: You’ve got quite a collection of DVDs!

Ann: Yes, we do. You’re welcome to watch anything you’d like, but my husband has them filed very carefully, both alphabetically by title, and by genre, so please put everything back exactly where you found it.

In New York State you can bring back empty bottles for a 5 cent deposit.

You have to bring back library books after two weeks.

If you go to France, please bring me back some perfume!

“To take something back” can mean to return it. For example:

“I need to take back this sweater. It’s much too big for me!”

However, often we use “take back” to refer to words we should never have said or actions we should not have taken. For example:

Fred and Sandy got into a terrible fight. Sandy said some things to Fred that she wishes she could take back, but she can’t, and I don’t think Fred will ever forgive her.

Translation: She regrets saying those things. The things were already said. She cannot “unsay” them.

(Occasionally you might hear: “walk something back” used in a similar way, referring to words or actions that are regrettable but cannot be unsaid or undone.)

You may hear the phrase “to give back.” This can be used in a couple of different ways. The first way is to emphasize that the thing you want someone to “give” you actually belongs to you.

Jessie: Give it back to me! It’s mine.

Tracy: You said I could have it! I’m not giving it back!

Nancy: I just wanted to give you back that book you lent me.

Phil: Oh, how thoughtful of you. Thank you for returning it.

Nancy: No. Thank you for letting me borrow it.

“Pay back” conveys a similar idea with money. You get paid for a job, but you pay back someone from whom you borrowed money:

Fred: Sure. No problem.

Bill: Thanks! I’ll pay you back first thing Monday morning. I promise.

The second way we use “give back”  is to describe doing good things for others that make us feel like we are in some way repaying a debt. For instance:

Tracy: I like Apple products,  but they don’t give back to the community.

Maya: I know. Microsoft gives away millions of dollars every year to all sorts of social and educational programs, and they encourage their workers to give back as well.

You can click here to read an article about companies that are considered “great places to work” because they “give back.”

Here’s a quote about “giving back” from none other than Arnold Schwarzeneggar’s daughter, Katherine:

“When I was younger, I played sports and went to camp. As I got older, my parents began to instill in us the importance of giving back to the community, especially those places around the world that are less fortunate than my very privileged life growing up in Los Angeles.” — Katherine Schwarzenegger

And that would probably be a great place to end this post, except that I haven’t mentioned another common use of the word “back” which doesn’t have to do with going backward, or returning something to its previous state!

To back someone, can mean to support that person. For example:

Phil: Who are you backing for Board President?

Jim: I haven’t made up my mind yet. I know I’m not backing David. He’s done a lousy job. We need someone knew.

Sometimes we “back up” doesn’t mean “go backwards,” it means to support someone:
Lee: Jim, I don’t think your idea will work. I don’t trust your numbers.

Jim: Dave ran the numbers and double-checked everything. He’ll back me up on this. Won’t you, Dave?

Dave: Absolutely. I’ll back you up one hundred percent.

Ann: Without you there to back me up, I would never have made it through the last few months.

Deb: That’s what friends are for.

“Backup” as one word also means support. This form is used as a noun or adjective, NOT as a verb.

The police office called for backup.

This means the office called for support, for more police to back him or her up.

Ann: My brother is going to New York to be an actor.

Ann: If he doesn’t make it within two years, he’s going to law school.

If you don’t find a job in your field, what’s your backup plan?

Singers who sing in the background on a recording or live performance are sometimes referred to as background singers, backing singers, or backup singers.

Of course, I still haven’t even gotten to other expressions with back such as “baby got back,” “put your back into it,” “to go back and forth” and so on, but I’ll be back with more next time.