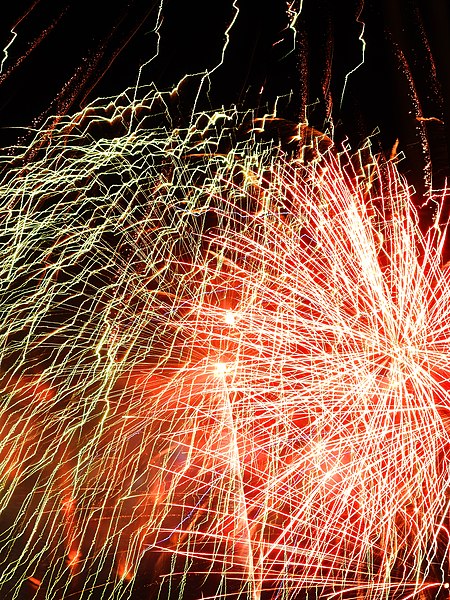 English has tons of idioms and phrasal verbs which are difficult for non-native speakers to master. Phrasal verbs are especially tough because they often have more than one meeting, or the meaning is idiomatic and difficult to explain. I love to teach the difficult ones! One of my favorites is “set off.” “Set off” seems to mean the opposite of what we think it should mean.

Take a look at the examples below. Can you guess the meaning from the context clues provided?

My house guests forgot to turn off the burglar alarm, and accidentally set it off when they entered through the back door. The sound was very loud and woke the neighbors, who called the police.

Adding the new chemical to the formula set off a chain reaction that led to an explosion. Fortunately, no one in the lab was injured.

The terrorist tried to set off a bomb in his vest by pulling on a cord. Many people would have been killed or injured, but fortunately the bomb’s fuse didn’t ignite, and no one was hurt.

Something must have set Bill off.  When he came in this morning he seemed normal, but later that day he suddenly became upset and yelled at his assistant. Then he announced he left the office abruptly. Did he get some bad news or something?

I wish my neighbors wouldn’t set off fireworks in their backyard. Fireworks are loud and dangerous, not to mention illegal.

Try this: If you think you understand the meaning of “set off” in the above examples,  substitute another word or phrase for set off:

Okay, now that you’ve tried it, I’ll give you an explanation with some possible substitutions

My house guests forgot to turn off the burglar alarm, and accidentally set it off when they entered through the back door.

The burglar alarm STARTED when they entered..

Adding the new chemical set off a chain reaction that led to an explosion.

The new chemical STARTED or CAUSED  a chain reaction.

The terrorist tried to set off a bomb

The terrorist tried to START the process to make the bomb explode. He tried to IGNITE the bomb.

Something must have set Bill off.

I wish my neighbors wouldn’t set off fireworks in their backyard.

In all of the above examples to “set off” means to “start” something in the sense of  “ignite” or “spark.”

This can seem counterintuitive because we think of the word “off” as stopping a reaction, not starting one. For example: We turn off the light. We shut off the oven. We complete a journey and get off the bus. However, “off” is a word that can be used in many ways and with different meanings. Context is everything in English.

In all of the examples above “set off” has a similar “explosive” meaning. However, sometimes we use “set off” in a less explosive way. We can use it simply in the sense of starting a journey or trip. Here are some examples:

We set off early in the morning because we wanted to arrive with enough time to enjoy the day.

I’m setting off for Mexico later in the week. The ship sails on Thursday.

When I set off  for work that day, I had no idea that everything in my life was about to change.

In the examples above, the phrasal verb “head off” could be substituted, as that also means to start a journey.  However, we cannot use “head off” in the previous examples where “set off” means to start in the sense of ignite or spark. “Head off” also has a second meaning. We use “head off” to mean to avoid something by going in a different direction. Let’s look at an example of both of these phrases in the same paragraph:

Bob and John seemed to set each other off. Their personalities were just very different and they didn’t get along with each other or work well together. In order to head off problems, their supervisor placed them on different teams so they never worked directly with each other.

In the above example “set off” is used in the negative sense of igniting some kind of friction. The men didn’t get along. Therefore, the supervisor wanted to “head off” or “avoid” problems, and kept the men separated. The words cannot be used interchangeably.

There is also a third common use of “set off.” We use “set off” to describe the way one element brings attention to or shows a contrast with another element. We use it in descriptions of people, decorations, designs, etc. Here are two examples:

Jenna looks great in that blue shirt. The light blue color sets off the deep blue of her eyes. It’s a fantastic color for her. You really notice her eyes when she wears it!

There are several lamps in the painting. The light from the lamps is set off against the otherwise bleak scene of war and destruction.The light symbolizes hope and contrasts with the chaos surrounding it.

You are likely to encounter “set off” in everyday speech, as well as in books, movies, and television shows.

I hope you found this lesson on “set off” useful. Feel free to leave comments or questions. If you are interested in taking English lessons with me, please get in touch!